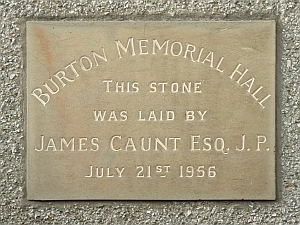 The date stone for Burton Memorial Hall was laid on July 21, 1956, by James Caunt, esq., J.P., the editor of the Morecambe Visitor newspaper, who lived in Burton at the time. Fundraising for the Hall had begun 16 years before during the early days of the Second World War. A plaque inside bears the inscription: Burton Memorial Hall Built by public subscription in appreciation of the men and women of the parish who served in the defence of their country. Opened by C.W.I. Penrhyn-Hornby Esq., 18th May 1957 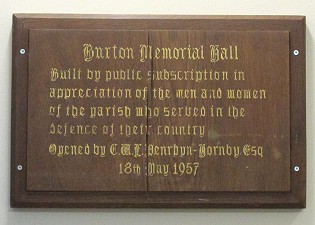 The Memorial Hall has been extended since 1957 and now comprises the main hall, two meeting rooms and several store rooms. It is one of the busiest village halls in the area, being used daily by groups ranging in age from Pre-School to Pensioners, and encompassing all forms of sports, leisure and recreation, as well as frequent fund-raising events.

The Golden Jubilee in 2006 saw the Memorial Hall and this was celebrated by a week of events from 8-15 July 2006. Many Hall users extended an open welcome to new members, and taster sessions and extra activities took place.

An extensive study was undertaken into how to improve the Hall in line with the needs of modern users. Feedback from Hall users about what changes they would like to see will always be welcomed by the Management Committee.

2011-2012 saw the Hall successful in the BIG Lottery Jubilee People's Millions contest, which has allowed new heating and lighting systems to be installed, along with new toilets for under-5's and a safe play area at the rear of the building. The background to the project and photos of the work undertaken, with the improvements made may be found in the links below:

2016-2017 saw the Diamond Jubilee of Burton Memorial Hall, marking 60 years of serving the community of Burton in Kendal.

As part of the 2018 centenary of the Armistice we have published a list of the Burton soldiers who died in the Great War 1914-1918, which you will find under the History link in the menu above. 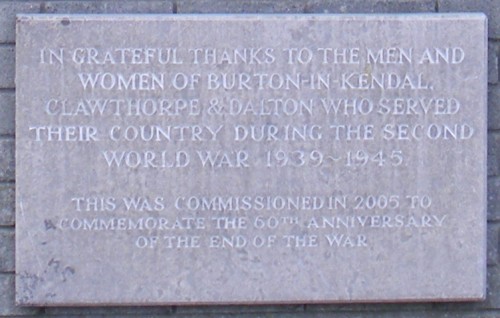